Both visits were different in the energy shifts and changes..

We visited The Catacombs early evening as its summer the nights are lighter for longer so we toke this chance on visiting in sun light as well as when the sun was setting into dusk.

We arrived at the Catacombs between 8-9pm it was a lovely sunny day, this was such a good idea to go when it was still sunlight as we had not been there before it was great to get a look on our surroundings before it became darkness, this place is a popular place by day a lot of people walk through it and they get a lot of tourists to the catacombs also,

As we toke a walk around the graveyard we was drawn to the area at the top of the Catacombs,

There was a few gravestones at the top that we was both drawn too. so we thought it would be a good idea to place some equipment by the gravestone we was drawn to.

We placed the Rem & Temp Pod by the gravestone which will notify us on any temperature changes, or energy picked up around the long atenia.

and placed our flux response which picks up on energy around the area it is placed by, we also use this device for intelligent response, for no answers it is Red it stands for negative

The green response flashes green for yes positive responses, we placed that the other side of the Rem, we then started to ask out some questions.

We both picked up that we was talking to a solider of the last world war after looking at the gravestone to find out the time he died around did link with the world war time,

The Flux response was the only thing that was going off rapidly and intelligently with our questions we asked out, the rem pod did not get effected what so ever.

As it started to get dark we went down to the bottom of the catacombs the energy really did change down there all of a sudden as we was walking around the circle, the energy that builds up around there is insane! we set a few pieces of equipment up down there we had the ovilus our electronic dowsing rods spilling out random names and words all while we was live recording on air on Facebook, we toke a few thermal images of the big gravestone that is centred in the middle of the circle, which came out very interesting indeed one at the time that i had to de-bunk i was questioning why a stone would show up as a red hot source then it dawned on me that dur yes it was a hot day like i said, although since someone has contacted me since telling me his team went in the winter and that 1 stone was red hot the others wasn't just that 1.

Which has brought us to want to do more experiments around that area!!!

Vicky and John both had a moment and froze with fear of not wanting to move, Joanne was the only one not picking the vibe up for once! To which Joanne was saying at this point ok if you cant i can i do not feel no fear at this point let me walk around that circle and back to you guys you dont have to move just stay there, to which they was adment no do not do it not now Joanne wanted to actually sit down in the circle and try to preform a communication to the spirits around that point. 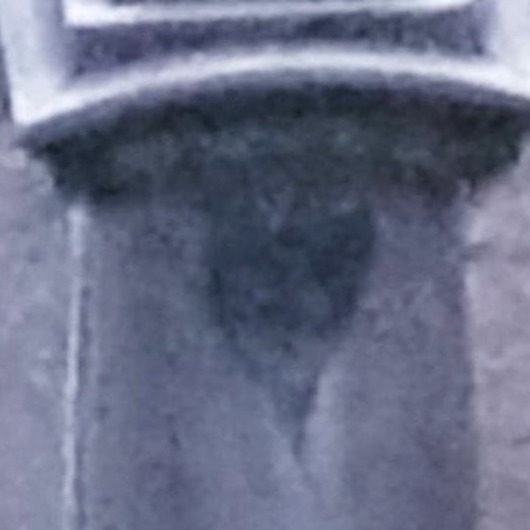 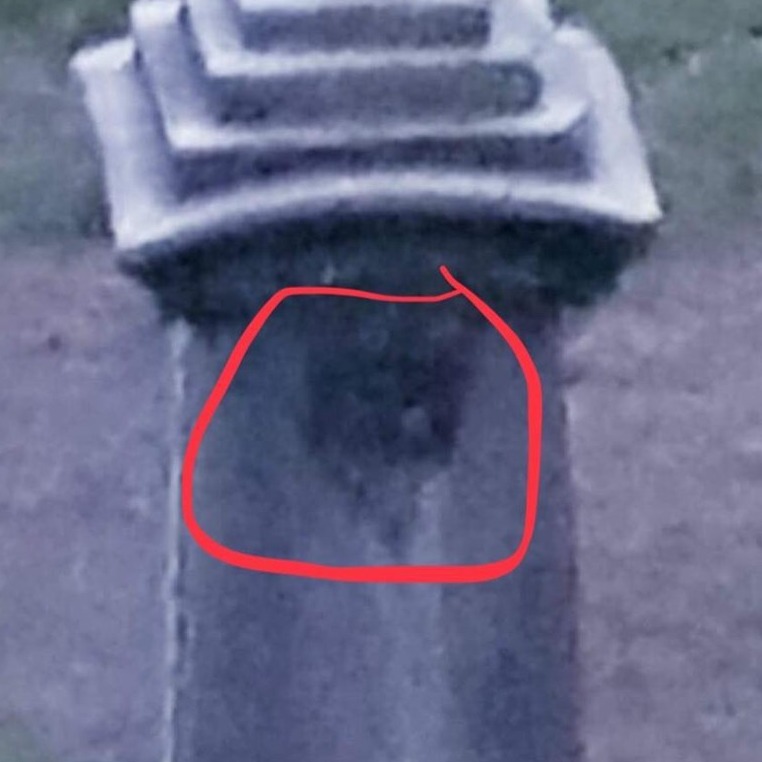 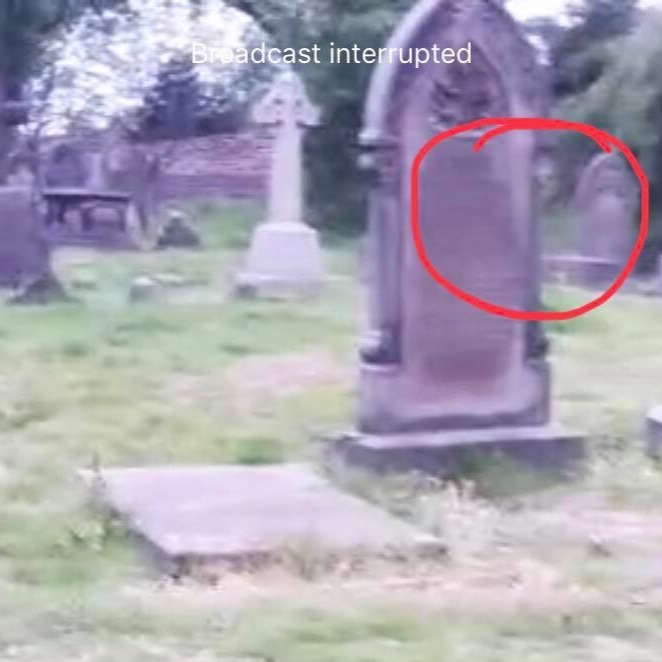 Here are some interesting photos!!

The 1st two was taken by our Team Member Vicky of the Large Headstone in the centre of the circle by the Catacombs it is kind of eerie to be honest you can actually see a set of eyes staring back at us, we toke some thermal images which you can see further below of the same area!!

The 2nd Photo was sent to us by one of our top fan viewers who never fails on watching us she spotted this great photo and screen shot and sent it to us so thanks to the lovely Ann Rees for this and all your support you do you are a huge God send.

We decided to take another visit to the catacombs this time there was 6 of us we meet up at Birmingham Jewellery Quarters and toke another walk around the catacombs mainly to show all of my time this fabulous area it is heaving with history and energy of Birmingham.

We even found another Catacombs near by which was even more creepier than the one we was in we are going to show you this shortly guys!

Two of our team members left around 10:30 so we decided to again go back to the catacombs and Vicky felt a little easier being in the graveyard at night this one was her 1st time!

As we headed down to the Catacombs which yes we actually reached the centre of it all this time the time was around 11:00pm by now, We can started setting up equipment around the big long head stone in the centre of the circle which at the start everything was calm with no lights flashing on any of the equipment i was using the flux response and this time the edi plus which is like a k2 but is so much better nothing sets it off it picks up pressure changes any breezes vibrations..

We was actually live when all this happened in an instant the energy changed rapidly,

The edi started flashing as well as the flux response it wasn't before long it was notifying us that negative energy was around us, In a second of asking do you mean us any harm right now it started to flash to yes and the edi was going mental every single light possible was flashing,

i had a huge pressure kinda pain in my stomach which made me feel sick i went all dizzy my throat went then all of a sudden my breath also went and i couldn't breath like someone was sitting on top of me you can hear this in the video i was on, My guide literally shouted at me "GET OUT NOW"! I went to tell the viewers i gotta go now and i noticed one of the viewers completely seemed to tune into all what was happening she replied i feel such a dread coming on Joanne get out of there now its not safe, well i heard the safe so no need to tell me for the third im off.

Now this because the terrifying moment getting out the graveyard as we was right at the bottom of it by now we was surrounded i could see that as we started to move around the circle to get to the top of the catacombs as we came around the circle directly in our path was 3 male spirits just standing there as i am saying at this point im leaving let me go as the parted to let me through i walked up the steps to get to the top entrance and as i did i heard a twig break behind me like someone had stood on it that did freak me out i wanted to run but i now no do not do that it will feed it with even more energy so i stayed calm and just walked but yes there was figures everywhere we looked like they had all come out at the point.

As we are fastly approaching the entrance we could all hear footsteps walking close behind us as if they was making sure we where actually leaving, to which when we reached the car just parked outside Vicky sister was looking at the wall of the jewellery quarters which was at the top of the street with a shell shocked face, after he explaining to us what did i just see a ghost i asked her to explain what she saw to which in shock that was the spirit i seen moments before in the graveyard.

she said she saw a man with a hump on his back walk out of the entrance of the graveyard turn right and walk all the way up the road and vanish into the wall of the Jewellery Quarters,

Moments after her telling us this she was violently sick like 5 times,

but what is it that i do want to know!!

We have been asked since to do another investigation there but this time it will be 2 teams 1 location this will be amazing make sure you tune into that!! 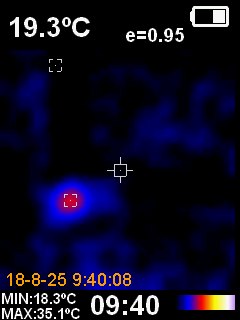 Now im not to great with thermal images to be honest also look complicated to see much at all really but the 1st picture i toke is slightly odd as it actually looks like a figure standing by the head stone holding something in its head, this one is very interesting.

Do let us know your thoughts on these pictures would love to hear your views on this?

Join In with us live on Facebook unfortunately we cannot go live on you tube yet due to not reaching the 1,000 subscribers rule so all our lives are done on Facebook on real time but down loaded to you tube either a few hours later or a day later.

Feel free to look at the live video that was uploaded to youtube!

and hit the subscribe button to see all our latest investigations,

Don't forget to hit the notification bell you will be notified when we next live..

BEING RIDDEN BY THE NIGHTMARE